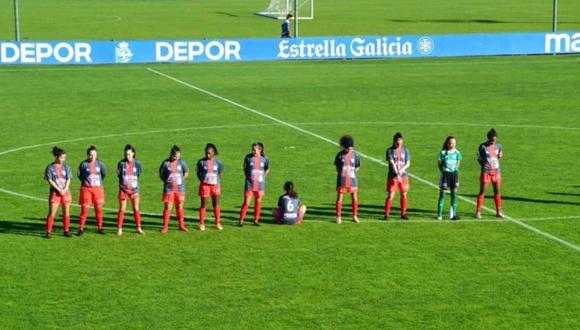 This post has been brought you by  laroja-deportesonline.com  The best online site to watch live soccer matches

Paula Dapena, 24, is the young woman who did not want to participate in the posthumous tribute to former Argentine player Diego Armando Maradona.

Diego Armando Maradona has been the target of tributes around the world in recent days. That is why the act of protest of a young soccer player from Spain drew attention, who refused to participate in the posthumous tribute to the former Argentine player and the news of his decision became a trend on social networks.

Paula Dapena , a 24-year-old Viajes Interrías FF player, refused to observe a minute’s silence for Maradona and, unlike her teammates, sat on the grass and turned her back on the tribune during the tribute. The event occurred before the start of a friendly match against Deportivo de La Coruña.

“A few days ago, on the Day for the Elimination of Gender Violence, these gestures were not made and if the victims did not observe a minute of silence, I am not willing to do it for an abuser,” said Dapena. “To be a player you have to be a person first and have values ​​beyond abilities like those he had, which we know were spectacular soccer qualities and gifts , ” he added, speaking to Pontevedra Viva.

The soccer player also said that she refused to observe the minute of silence “because of a rapist, pedophile and abuser” and that she had to sit “on the ground and turn her back.”

It should be added that Dapena’s team ended up losing the engagement 10-0.