It’s no news that Facebook has been dreaming big about the future of augmented reality and virtual reality, but one of the most fascinating plans has to do with memories.

Rachel Franklin, director of Social VR at Facebook, presented a multi-stage plan to create 3D spaces and experiences from personal photos, which is underway, starting with the ability to upload 3D photos.

The next step is strange: eventually, the biggest goal is to use AI to convert these photos (and videos) into 3D data that will form a virtual space where memories can be reviewed.

The demonstration made it seem, literally, the digital version of a memory palace.

The photos hang in space, framed in a pointillist world made of dots that trace a 3D space. Franklin said Facebook could generate a cloud of points from flat 2D videos that would become a virtual 3D space that is compatible with virtual reality.

In addition to this cloud of blurry and dreamy points, more photos are suspended. Franklin says these spaces will be areas where friends and family could enter together.

He suggests that Facebook is working hard to find a way to bring the personal world of Facebook content to the world of Oculus VR, which would otherwise be relatively memory free.

Of course, we already receive our virtual memories daily through the archived Facebook publications. 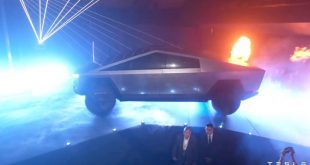 Internet Users Mock the Design of Cybertruck, The New ‘Van of the Future’ by Elon Musk

The co-founder and general manager of the Tesla company, Elon Musk, presented the expected futuristic …