Horse Risks His Life to Save His Companions During Forest Fire

The black steed crossed a smokescreen, to go rescue his family who had not been able to find their way to safety.

Firefighters and volunteers saw how the horse returned to gallop and entered the forest from which it had been rescued minutes before.

He was looking for his pack that he finally found on one of the smoking trails.

It was another horse and a foal that were immediately guided by their leader.

The scene was recorded in Simi Valley, California, United States, where wildfires have consumed large tracts of land.

The horse and his family managed to return safely, to receive rescuers’ attention in the middle of the hell that is lived in the southwest of the country.

Watch the amazing viral video posted to Twitter below:

From the #EasyFire in Simi Valley – this thoroughbred goes back into the blaze to get his family. Not all heroes wear capes…💪🐎😍 pic.twitter.com/BsU6PlBq8R 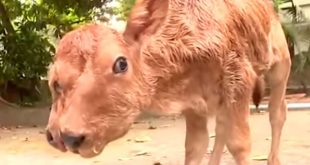 His story went viral on the YouTube portal. In India, a newborn calf became a tourist attraction …