The confinement that requires fighting a global pandemic such as the Coronavirus allows us to have a lot of free time and, therefore, to enjoy some hobbies that we cannot dedicate so many hours with work and/or studies, among other occupations.

One of them is video games, with Electronic Arts’ FIFA being one of the most played games in the world, today we will look at this line up with a 3-4-1-2 system that best fits the attributes of footballers.

Firstly, give the goal to Wojciech Szczesny, who with an average of 86 is one of the main goalkeepers in the game and the best on the team, ahead of Gianluigi Buffon (83) and Mattia Perin (82), although this second, he may not be on the squad depending on the update, since in winter he left on loan to Genoa.

In defense, go for three centrals to give consistency and, especially, to compensate for the lack of attributes. For example, Leonardo Bonucci has no place in the line up as he is very slow (58 pace) and a weak flank if spaces occur.

Have Giorgio Chiellini in the left-handed profile, since the left is his good leg and he only has 3 bad stars, while Merih Demiral will appear on the right for repeating this situation with his right hand. In the center, Matthijs De Ligt, with 4 stars with a bad leg, will be ideal to go out playing towards all profiles.

The lanes do not allow us too much margin. For example, Alex Sandro is the only left back of the team and Douglas Costa has too little defense to collaborate behind.

On the right, Juan Cuadrado is the most compensated of footballers, with great speed despite not having great defensive attributes, but the ability to come and go easily. His little resistance (74) makes him a substituted potential, where we would have other options such as Danilo Luiz or Mattia De Sciglio.

In midfield you need two profiles with a good contribution in defense, but capable of serving as a link with the front. For this we have Adrien Rabiot, more prone to attack, and Blaise Matuidi, more defensive and with good ability to withdraw in case of loss with many attack troops.

In this case we do not align Miralem Pjanic due to its slowness (68) and physical (67), since it is a system where the spinal cord can be very exposed and it is better to lose pass (87) and dribble (85) in order to gain consistency .

Paulo Dybala is the link between that less creative core and a well-compensated attack. It can serve us both for contexts with small spaces as well as wide ones, given that it exceeds 80 of attribute in all offensive except for the long pass (75). It will help us to find the forwards or to solve the play himself with a distant shot. 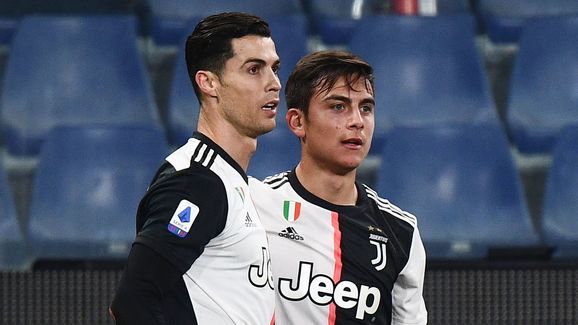 On offense is nonnegotiable the presence of Cristiano Ronaldo, one of the best strikers in the game including the letters of Legend Ultimate Team. Speed, shooting, header … Any mistake that leads to an option to attack the rival goal will be a danger.

Your companion is already an interesting debate depending on the update of templates that you have. On the one hand we have Gonzalo Higuaín, who stands out in the shot (85) and the dribble (80) with respect to Mario Mandzukic (80 and 76), who in January went to Al Duhail of Qatar.

However, his low resistance (60) puts him far behind, in the same way as the 34 defense points and the 15 physical points in which the current world runner-up prevails.

The Argentine will end the game with very little energy, so the possibility of replacing him with the Croatian or directly that he enters as a shooter are more viable than having him for the entire contest.

Obviously the eleven is conditioned by the style of each user, so that someone who is particularly good at filigree will not be able to feel in full comfort with this alignment.

However, for those players who opt for a compact block and try to go out on the counterattack, it may be a good option.

In addition to the last specified change and that of Juan Cuadrado, there is also Douglas Costa as a possible revolutionist or Miralem Pjanic himself if the stake needs to be relaxed. Juventus are undoubtedly one of the most interesting clubs to play FIFA 20 with.

Previous Juan Manuel Correa, the Pilot of Overcoming and Perseverance
Next The Government of Germany Proposes to Start the Bundesliga Playing with Masks